1. Why do fewer people know about APs?
2. Who performs APs?
3. How does the APs class differ from the BPs class?

1. WHY DO FEWER PEOPLE KNOW ABOUT APS?

The reasons are greater restrictions enforced on APs and insufficient information provided about them:

Greater Restrictions. Only 2 people in the world are authorized to teach APs: Bikram Choudhury and Emmy Cleaves–Bikram’s student and principal teacher of his yoga. In contrast, Bikram Yoga practitioners throughout the world are authorized to teach BPs. Another restriction is teaching locations: APs are taught only at Bikram’s Headquarters in Los Angeles, CA, but BPs are taught in 6 continents.

Insufficient Information. Below is a picture that exemplifies the inadequate information available to a Web surfer who seeks free information about APs. As of May 29, 2013, the largest size of this picture that Google provided is 870 x 480. When viewed at its default size or at a zoomed-in size, this picture shows some, if not all, of what the postures look like; however, none of the words except for the title is readable when viewed at the default size or at any zoomed-in size. 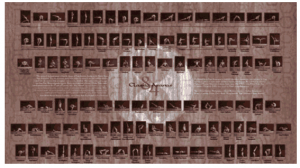 This picture’s title is “84 Classic Asanas” (asana means posture) but this picture has 110 images. Upon closer inspection, one can see that some of the images are seemingly grouped together using upward-facing square brackets. Below is a zoomed-in example of images 5-9 counted from the right in the 2nd row:

Within this zoomed-in view, the yellow arrow points at the only existing bracket, which seems to group the 3 middle images together as though they’re 1 asana; however, whether or not they represent 1 asana remains unverified because the only readable text is the title. Also, other brackets do not clearly and consistently indicate which images are grouped together; an example of this is shown in the zoomed-in view below:

These are images 4-10 counted from the left in the 1 row. A bracket seems to group 4-9 together, but then continues past 10. This leads to a question: Why does the bracket look as though it’s continuing past its end? The question remains unanswered, though, because not enough information is available.

In contrast, this website provides the following information about all 26 BPs:

How does the APs class differ from the BPs class?

They differ in 2 ways:

Between 5:18 and 5:42, Mr. Sanchez confirms that an advanced system called Yoga Challenge 3 takes between 90-120 minutes to complete and is based on 84-90 different exercises. However, he doesn’t explain what he means by “exercises,” and this absence of explanation further demonstrates that the information which is provided about APs is lacking.